During the year, 2021, our minister marked 32 years of preaching the Gospel of Jesus Christ, and twenty- seven years of Baptist ministry. 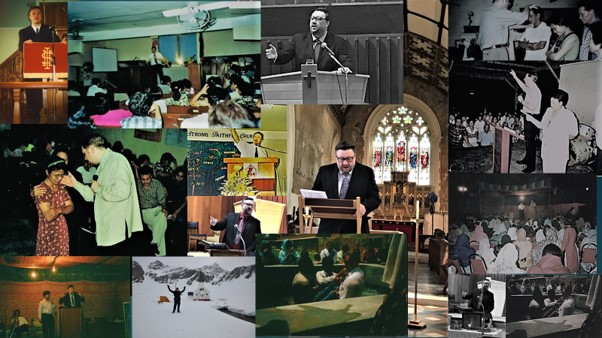 "The greatest privilege of my life has been to serve Christ. It has not always been easy, far from it, but I am pleased that when He called, I said YES!."

"I never dreamed, that when I said yes to Christ, just how many adventures in faith I would have." 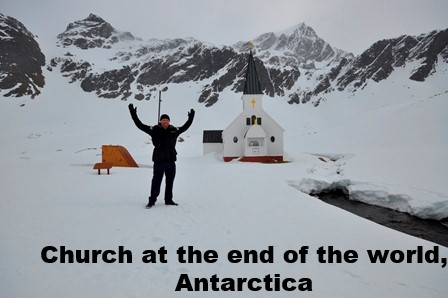 "When I said yes to Christ, I said, 'Lord, send me all over the world.' That prayer has been answered. I have even spoken at an old whaling church, the southernmost church in the world, in Antarctica. What an adventure in faith it has been."

'Walking by faith, is an adventure, you never know where it will take you! The average life consists of less than 1,000 months, it is too short to live a boring life so let's make it count!' This statement, often said by Sean throughout his ministry, has certainly proven to be true in the adventurous ministry Sean has had to date.

Our Minister is the Revd Sean Carter, an Ordained and Accredited Minister of the Baptist Union of Great Britain. Born in Kent, Sean felt the call of God at an early age. He joined the Royal Navy at sixteen as a Marine Engineering Mechanic followed by service in the Merchant Navy. During this time he completed a Diploma in Theology focusing on  Pastoral Sociology, followed in time by a further Diploma at Spurgeon's Theological College on Mission, Church Planting and Contemporary Evangelism and then a Degree in General Theology.

Sean's First Ministry was in Northamptonshire where he was minister of two rural village churches and an assistant Chaplain to Gartree Prison. He gained skills and qualifications in counselling and life-coaching. During this period of time he  also travelled widely and his speaking ministry took him to many places around the UK and abroad, places such as Cambodia, Jamaica, Malaysia, Pakistan, and many other countries including the Philippines where he met the future Mrs Meldy Carter.

Sean and Meldy have been married for 24 years and have a son, Joshua aged 22 and a daughter, Hannah, aged 21.

Sean stayed in Northamptonshire for seven and a half years, after which he moved to Walmer Baptist Church in Kent and stayed there for seven and a half years studying for another diploma and a theological degree. During this time, as well as Minister to the church, Sean was a Chaplain for the British International Sailors Society (Now the Sailors Society), ministering and counselling to the crews of the ships coming into the Port of Dover, and the people staying at the local Seaman's Mission that Sean worked from when on Chaplaincy duties. He was also a volunteer member of the Walmer Lifeboat crew saving lives at sea and was involved in some dramatic rescues. Less exciting, but equally important, he was a School Governor for several years supporting the local Primary School.

After ministry at Walmer, Sean re-joined the Royal Navy and took the Queen's Commission and became a Royal Navy Chaplain. He trained at Britannia Royal Naval College Dartmouth and then served on HMS Ocean, then at RNAS Yeovilton, before becoming the Minister of St Columb's Naval Church at RNAS Culdrose. During this time Sean, along with a chaplaincy team, worked with medical professionals and within the divisional system on the base to provide effective pastoral care for over 3,600 people. He shared managerial and pastoral oversight of an Internet Café and some Social Housing, as well as being the Charity Officer for the base, deciding how and when to give charitable donations on behalf of the personnel of the Royal Navy based at Culdrose, many of whom gave a percentage of income each month towards such causes. In addition to general pastoral care and counselling, Sean and the team also used the SMART and GROW life-coaching models to help people reach their full potential.

On a regular basis, up to 30 people between the ages of 16-36 would come for a SDC (Spiritual Development Course) where new naval recruits in Phase 2 of training would be taught to understand their mortality in a military context where losing one's life in action was a very real possibility. Sean re-wrote and re-designed the course and provided a new syllabus. He also lectured, wrote and led courses on topics such as Leadership Skills and Management, Pastoral Care in a Military Context, Safeguarding Vulnerable People, Public Speaking Skills, and many other diverse topics to those in leadership roles, always offering people, no matter how experienced or well-trained themselves, the chance to learn new skills.

Sean was specially trained to use the TRIM system (Trauma Risk Management) to assist and recognize service personnel returning from combat situations with potential PTSD (Post Traumatic Stress Disorder).  After leaving Culdrose Sean became a fleet chaplain to RN ship's in Portsmouth and after specialized Sea Training, which included helping to organize disaster relief efforts, he travelled widely as a sea going Chaplain on numerous Naval ships; HMS Dauntless, HMS Lancaster, HMS Richmond and others, and sailed to places such as Antarctica, the Caribbean, Africa, Western and Eastern Europe and many other places where he had the opportunity to preach the Gospel of Jesus Christ.

Sean and his family moved to Halstead in September 2014 and he took up a position as minister of the church.

At Halstead, Sean's ministry has encouraged the church to have a deeper knowledge of the Word of God and an ever growing vibrant relationship with Christ through the Holy Spirit, the results of which will be, we will think big, and have higher aspirations and ambitions for the Kingdom of God expressed through the Church on a local level. To Sean the greatest tragedy is not trying and not succeeding, but being too afraid to try new things in the first place. Sean says, 'Christians always need a fresh baptism of the imagination so that we can break barriers and expand on new frontiers. We should have high aspirations and plan big and bold, recognizing the lengths God has gone to through Jesus Christ. We are called to be a light and a blessing to our communities and share this wonderful and beautiful Gospel of Christ, and that is just what we will be and do.'

in 2018 The church has now purchased a commercial property on Halstead High Street, and Sean oversees the team at the Rivers of life project where a team develop ministries that continue to change people's lives for now and eternity.  In 2021 the church purchased another house in the town which is available for refugee families. The next stage of the adventure has begun.